The figure shows the operative position of the patient.  The transrectal probe is in place.  The surgeon is placing a needle into the prostate via the perineum.  Seeds will be implanted via the hollow needle.

What brachytherapy (internal radiotherapy) is

Your specialist may suggest that you have internal radiotherapy to try to cure your prostate cancer. This treatment is becoming more common and is called brachytherapy. There are two types of brachytherapy - seed implantation (low dose rate) and high dose rate. Both types treat prostate cancer with radiation from inside the prostate gland. But there are differences in the way you have the treatment.

Seed implantation means that the radiotherapist puts between 60 to 100 very small radioactive seeds into your prostate gland. This type of radiotherapy is available in many hospitals in the UK. It is also sometimes called implant therapy, implant brachytherapy, or low dose rate brachytherapy. The seeds stay in the prostate and they release radiation slowly for a few months. Over this time the prostate receives a high dose of radiation. The radiation does not travel very far in the body. So, the healthy tissues around the prostate gland receive a much smaller dose than the prostate itself. After a few months the radiation in the seeds fades away.

The National Institute for Health and Clinical Excellence (NICE) issued guidance on the use of low dose rate brachytherapy for localised prostate cancer. They say that it is a safe procedure and that it works as well as surgery or external beam radiotherapy for men who are suitable for this treatment.

When brachytherapy is used

You can have brachytherapy on its own if your prostate cancer is localised. The radiation does not travel very far, so your prostate cancer must not have grown more than a millimetre or two past the outer covering (capsule) of the prostate. It must be a stage T1 or T2 cancer.

If your prostate is quite large, you may have to have 3 months of hormone treatment to shrink it before you have your brachytherapy.

If your PSA reading is high (over 20) brachytherapy will not be suitable for you, because it shows that your cancer is not likely to be localised, even if your scans show that it is.

If you have had a TURP operation you will be more likely to have incontinence of urine after this treatment and so it may not be the best choice for you.

How you have brachytherapy

Internal radiotherapy involves a planning phase and a treatment phase.  Most centres combine these two phases into one session. Your doctor uses a trans rectal ultrasound scanner to find the exact size and shape of the prostate gland. They call this a volume study. The scans give a three dimensional model to help your doctors plan how many seeds you need and exactly where to put them.

Once your specialist has planned your treatment and radiation doses, you go back to the hospital, either for the day, or overnight. Before the treatment session you have an enema to empty your bowel. You have the treatment under a general anaesthetic or a spinal anaesthetic. You lie on your back, with your feet in stirrups (supports that keep them up in the air). Then the doctor puts the ultrasound probe into your rectum. They put a plastic template with holes in it in front of the skin between your legs.

For seed implantation brachytherapy, the doctor pushes needles containing the seeds into place inside the prostate. The needle is carefully pulled out and the seeds are left behind.

Once you have recovered from your anaesthetic, you will be able to go home. Usually, this is on the same day as your treatment.  Your doctor or nurse will give you painkillers to take if you need them. Some men do not need them. You should expect to be completely back to your normal routine within a week.

Side effects of brachytherapy

For a few days you will have some soreness and bruising between the legs where the needles or thin tubes went through. The most common side effect with brachytherapy is difficulty or discomfort when passing urine. Up to 15 out of 100 men are unable to pass urine at all and have to have a catheter put in for a few days. This side effect can last for up to a month or so.

Often, men have few problems during the first couple of weeks after brachytherapy. If symptoms occur they may peak at around 4 to 6 weeks after treatment because the radiation causes swelling. The symptoms then usually improve over the following months. Symptoms may include the following

The radiation dose with this treatment is localised to the prostate, so the other common side effects of external radiotherapy (such as diarrhoea or erection problems) are less likely to happen.

This treatment can have side effects that last for longer than a few weeks. For most men, these symptoms do settle gradually, but for some they are permanent. Possible permanent side effects include the following

Inflammation of the back passage (proctitis)

After this treatment some men develop difficulty in passing urine due to a swelling of the prostate.  This can be countered by taking a type of drug called an alpha-blocker for up to six months.  Much less commonly can occur a narrowing of the tube that carries urine from the bladder to the penis (the urethra). The narrowing is called a stricture and can cause difficulty in passing urine. Having no control over passing urine (incontinence) is not common unless you have already had a TURP

Whether you have problems getting and keeping an erection after brachytherapy depends on your age. It is difficult to say exactly how common this is after brachytherapy. The risk varies with age - if you are under 65 when you are treated, erection problems are less likely than if you are over 70. If you have other health conditions this may also increase your likelihood of impotence after treatment.

For combined high dose rate brachytherapy and external beam radiotherapy, the figures on erection problems from research vary a great deal. One difficulty is that the studies don't all use the same definition of erection difficulty or impotence. The studies report that between 14 and 45 men in every 100 treated have some degree of problem. In older men, up to 76 out of every 100 had erectile problems 7 years after treatment (76%).

After seed implantation, you will have a low dose of radiation in your body for a few months. But by the time it reaches the outside of your body, the radiation dose is so very small that you do not need to worry about being a danger to other people. It is perfectly safe to sleep in the same bed as your partner and to have sex. But doctors advise that it is best to use condoms during sex for a month after treatment in case a seed comes out.

As an extra precaution, some doctors advise that you do not spend long periods in contact with children or pregnant women for two months after your treatment. After 2 months, the radiation will be almost gone. After 4 to 6 months, the radiation level will have fallen so low that it is barely there at all and cannot even be measured on a scan.

With seed implantation (low dose rate brachytherapy) there is a very small risk that one or more of the seeds could work its way out of your prostate gland. There have been reports of seeds moving into the bladder or the lung. This hardly ever happens. Even when a seed has moved to another part of the body, it has done no harm. The seeds are tiny. And you have so many seeds in place, that each one carries very little radiation. You may have an X-ray or CT scan at your first follow up appointment, just to check that they are in the right place. 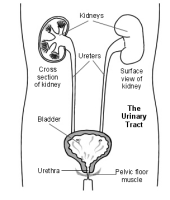